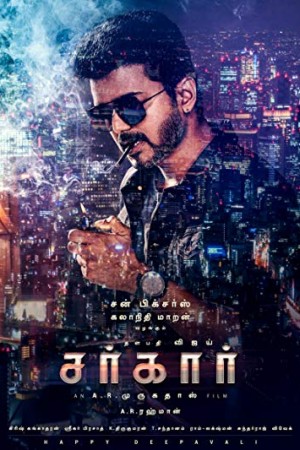 Sarkar is an Indian action drama film centred on an NRI CEO, Sundar, who returned to India for casting his vote. However, he gets shocked to know that his vote has already been exercised and starts a hunt for the truth. His fights lead to the cancellation of elections creating an enmity with the politicians and he gets involved in the political battle to settle the scores. Combining a sequence of actions and drama, the movie details in an interesting manner whether Sundar succeeds in his fight against the dirty politics or returns empty-handed from the battle that he started against the injustice done to him.

The team of director AR Muragadoss and actor Vijay is back again, expected to deliver another hit after the successful Kaththi and Thuppakki. In a plot that revolves around an intense political drama based on the recent political developments including the death of Tamil Nadu’s Chief Minister, the major focus of the movie stays on Vijay (bold, visible to cameras, and delivering on all fronts from start to end). Muragadoss did a justice by choosing a developed script rather than just fan service, wherein only a few actions scenes and songs weigh down the otherwise evenly paced script. While the story is extensively based on election laws, the makers deserve a credit for adding credibility with facts.

The character of Sundar keeps Vijay on top perhaps his first appearance while smoking a cigarette in slo-mo might not impress everyone as it has been used many times before. Instead of adding those larger than life moments, the character displays a limited heroism that every citizen who exercises his rights can perform. The confidence of a corporate honcho adds to the character’s intentions of taking down an entire political party. Moreover, portraying a character who doesn’t know all the answers rather comes forward to work with others for seeking solutions works positive for Vijay as well as the script.

Apart from Vijay, Pazha Kurappiah plays a lifeless and clichéd character while Radha Ravi gains some interesting bits, and the menacing Varalaxmi gets a mismatching characterisation. Keerthy Suresh, with the only job of walking alongside Vijay in most of her character, is dismissed early on in the film. Out of some decent songs by AR Rahman, the theme song Poraali adds a pace to the script and Gireesh Gangadharan’s cinematography suits the purpose well. With Vijay’s strong performance, links to several real-life incidents, and an underlying message make Sarkar a smartwatch, which could have been trimmed a bit to make it a taut watch.