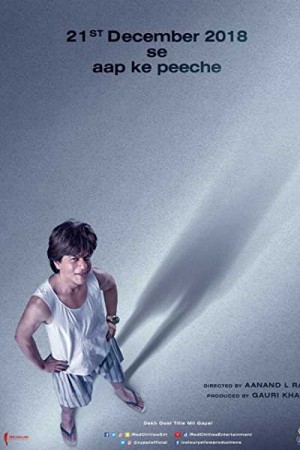 Zero is an Indian romantic drama film follows a rich but physically challenged man who is struggling to find a marriage partner. Bauua Singh, a 38-year old short man, is on a hunt to find his life partner where even matrimonial agencies fail to help him much. However, he eventually finds a companion in Aafia Bhinder, a NASA scientist suffering from cerebral palsy. At the same time, an alcoholic yet leading Bollywood actress Babita gets close to him, creating a love triangle among the three. Watch the movie to discover the adventure-filled journey of Bauua that takes him to far-off cities leading to the discovery of his true worth as well as true love.

The curiosity and novelty of watching the Bollywood King, Shah Rukh Khan, playing a vertically-challenged character is an advantage to the filmmakers. Though the movie fulfils the expectations of a strong suit from the writer-director duo in the first half, the second half seems more sluggish, incoherent, and stretched out.

Bauua Singh, a motor-mouthed, charming, and cocky character from Meerut is 4feet & 6inches all whose height fails to break his confidence. With such a character written by Himanshu Sharma and directed by Anand L Rai, Zero opens keeping the promise of an inspiring and an interesting concept. While Khan delivers justice to his character, Anushka Sharma fails to portray a convincing role of highly-qualified scientist suffering from cerebral palsy. On the other hand, Katrina Kaif delivers an impressive, realized performance despite a smaller appearance as compared to Anushka.

Starting with a self-absorbed, impulsive Bauua, things change dramatically when he meets Aafia with their shortcomings creating a common ground for a relationship between the two. Apart from the physical challenges, the completely distinct personalities of the two add a high-level drama to the plot. The story takes another turn when the Bollywood Diva Babita Kumari enters Bauua’s life, adding more drama to the story. All through the first half, the movie focuses on setting up this triangle of an unconventional love story. However, the unique ideas go audacious in the second half, moving out from the small town charm to the Bollywood in Mumbai while adding some surprising B-town cameos.

Unfortunately, the graph of the characters and the movie don’t add up when the story moves on to the US for a Mars-inspired mission. Despite having its moments, the writing fails to translate into a larger-than-life love story, and by the end, the movie starts feeling stretched out.

Overall, the movie makes up for a one-time watch with dazzling performances, moments of comedy & romance, and more, making you go light & easy. However, by the end, it fails to take you on the flight of entertainment as expected.