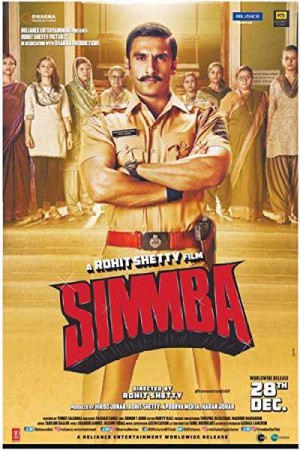 Simmba, an Indian action film, revolves around the journey of a fully corrupt police officer named Ranveer Simmba. After his transfer to the City-x, Simmba joins hands with Actor-X, the main antagonist there and both start walking the corruption route together. However, a twist comes when Actor-X accidentally kidnaps Simmba’s girlfriend Sara, turning both the heads against each other. When Simmba sets upon a journey to destroy Actor-X as well as his empire, he finds kidnapping not a simple criminal act but a part of a bigger hidden motive. How Simmba will uncover the hidden motive and succeed against Actor-X forms the rest of the story.

Simmba seems like a sequel to the Singham series except for Ranveer Singh as Sangram Bhalerao instead of Ajay Devgan as Bajirao Singham as a cop who was once a street-smart orphan. Most of the things are kept similar like the familiar set-pieces, bad guys vs cops with the glory of khaki uniform punchlines, the drowning background music, and leg-shaking hit music. This deduces the major reason to watch Simmba be Ranveer Singh and the actor did complete justice to it.

The massy entertainer features Ranveer Singh as a corrupt police officer in his top form who follows the mantra of doing ‘beimaani with imaandaari’. Right from his first scene, Singh shows a complete zest & style accompanied by the endearing Marathi accent along with his disarming charm, captivating the senses. With the first half being a sporadically enjoyable comedy, Ranveer delivers an impression of the cop who is hamming, dancing, singing, and wisecracking in everything he does. Ashutosh Rana, playing a cynical weary old cop creating some of the best moments while sharing significant screen space with the hero. Portraying a tentative relationship between the two, the makers successfully mine some genuine humour for the viewers.

As the film progresses towards the serious second half, Ranveer convincingly turns his easy banter into tough talks while using a rape-revenge drama as a catalyst of transformation for the cop. Once again, Singh packs quite a punch with his performance, and not to forget, Rohit Shetty’s trademark style comprising of a larger-than-life swag for the hero, the caricature of innocent family members, the SUV convoy, a dashing villain, and a lot of action. The leading lady, Sara Ali Khan, is another reason for many to go watch the movie. Despite a shorter screen presence, Sara switches on the sparkles with her breathtaking beauty & delivers a notable appearance through a few lines and a couple of songs.

Overall, Simmba is a good watch as a combo-pack of 2 movies in one, the comical first half and the serious action- & emotion-packed second half including a cameo appearance by the original Singham as well.