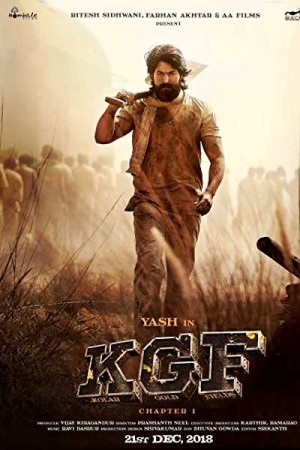 KGF is an Indian action-period drama in Kannada language and forms the first part of the 2-part series. Set in the 1970s era of the mining region & taluk of Karnataka’s Kolar district, Kolar Gold Fields, the movie follows a fierce rebel who raises a strong voice against the brutal oppression ongoing in the KGF area. Narrating the 1700-year-old history of the waging wars against oppressors that were oppressed, the first chapters details the rise of a protagonist as a symbol of hope to the group of downtrodden people in the area. Watch the movie to discover what led to the oppression in Kolar’s history.

Starring Yash in the lead with the story comprising of a revolutionary phase in Karnataka’s Kolar district, KGF has become one of the most awaited movies in South India. Released under the anxiety of enormous expectations, does the movie deliver to it? Yes, but with several hits & misses like a sloppy writing, overstretched scenes and more here & there.

Rocky emerges as an ambitious boy who wants to be rich & powerful before he dies. The ambition is given to him by his mother on her deathbed and Rocky flies off to Mumbai to fulfil her last wish. And, the story follows his journey from a common, determined kid to the invincible. While Yash’s star following, mass mannerisms and stylish looks along with impressive action sequences are a treat to watch, a decent performance by Srinidhi Shetty in a limited screen presence and the glamour show by the beautiful Tamannah add more to attractions for the audience.

An interesting screenplay tries to keep the viewers engaged with non-linear patterns and a steady growth pattern for Rocky. With the movie traversing from 1951 to 2018, it keeps the curiosity alive by revealing different characters. The art direction, cinematography, and locales add an extra edge with a top-notch appearance of different scenes, from the dark dreary KGF world to the glitzy Bangalore nightlife.

On the contrary, the slow-paced narration comes as a drawback at times as the director taking more time to unveil the plotline than what audience would expect. The fast-paced first half seems stretched while a flat narration creates dull proceedings until pre-climax, breaking interest of the viewers at times. Moreover, the editing work could have also been better as some points could have been trimmed in the second half. Also, the music doesn’t seem to be up to the mark, especially on the top of good production values and the background score.

On the whole, KGF could have been better in terms of music and length, though the build-up for Rocky’s character with a sense of temporary closure keeps the interest alive for the second instalment.